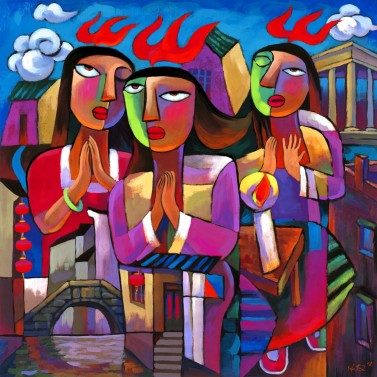 My Jesuit educated father, Dr. Peacock was big on comparative languages. Apparently up at Worcester, Mass at Holy Cross College when you learned one romance language you learned them all. So when any of my brothers or sisters dared approach the good doctor for a word’s definition or proper pronunciation— he would direct us to the dictionary collection on his library shelf. Then he would ask us:

Stumped by my dad’s linguistic brilliance, I barely managed to stutter at best some incomplete response.

So during my three years at Immaculata Preparatory School, I set out to prove myself equal to my dad — and just as gifted with the gift of tongues. I took three years of Latin with Sister Petra — Julius Caesar’s Gallic Wars and Cicero’s De Re Publica — so fascinating to a teenager! I took three years of French — just enough to catch a third of the words in a foreign film playing at the Circle Theater.

And I took two years of Spanish. My most memorable phrase from high school Spanish class is, “Me aprietan mis zapatos.” – which means “My feet hurt.” or quite literally “My shoes are squeezing me”!

I leapfrogged over my last year of high school – to start Catholic University early (I do not have a high school diploma!) To help pay my rent on my tiny Connecticut Avenue apartment, I had a part time job in Adams Morgan at a bi-lingual preschool – The Spanish Education Development Center.

I was a teacher’s aid in a classroom full of three year olds – none of whom spoke a word of English. My very first afternoon on duty during naptime, one little boy was extremely restless on his cot. So I broke out my high school Spanish to try and settle him down.

He was inconsolable until the teacher came in.

And little Guillermo ran off to the bathroom.

Over the course of three years, I learned colloquial and conversational Spanish – which I spoke all day long – and these folks became my neighbors and my friends…so many friends from south of the border — Mexico, Guatemala, Honduras, Ecuador, Venezuela, Puerto Rico, The Dominican Republic, Bolivia and Costa Rica. And my little Latino charges – they gradually learned English – and were fairly fluent by the time they entered kindergarten.

We were gifted with speaking one another’s tongues, but even better than learning to speak a foreign language — the Spirit had gifted us with the gift of understanding.

Many years later, 2001 to be exact, on a mission trip to the DR, I lost a bet with Bishop Gray (such a wonderful pastor and person Frank Gray is!). So instead of the “episcopos” in the pulpit on our last Sunday there was this “sacerdote” – me!

And I preached my one and only sermon in Spanish ever.

The Day of Pentecost, this day, the Holy Spirit translates God’s love into every possible human language.

“Now there were devout Jews from every nation under heaven living in Jerusalem. And at this sound the crowd gathered and was bewildered, because each one heard them speaking in the native language of each. Amazed and astonished, the asked, ‘Are not all these who are speaking Galileans? And how is it that we hear, each of us, in our own language?

Parthians, Medes, Elamites, and residents of Mesopotamia, Judea, Cappadocia, Pontus and Asia, Phrygia and Pamphylia, Egypt and the parts of Libya belonging to Cyrene, and visitors from Rome, both Jews and proselytes, Cretans and Arabs – in our languages we hear them speaking about God’s deeds of power” — God’s mighty deeds of Love.

Pentecost is the Tower of Babel redeemed. But more than that one scholar says, Pentecost is Christmas come again.

“All wrapped up in human form, God comes to us in our very own bodies; God speaks to us our very own language(s). In an age of increasing cultural diversity, religious pluralism, and the perpetual rubbing of shoulders across lines of nation, race, and class, God offers authentic human communion. Through ordinary human speech, the Holy Spirit establishes unity in the midst of diversity, the fulfillment of a promise…” (Feasting on the Word, Year B, Volume 3, p. 5, G. Lee Ramsey, Jr.)

Good, good news for a broken and divided world.

So Pentecost is to be practiced. Pentecost — the gift of the Holy Spirit –is a gift to be exercised at home and at work, in our neighborhoods and in our communities, with family, friends, and stranger, and right here in our own backyards — (especially in my bipolar backyard!)