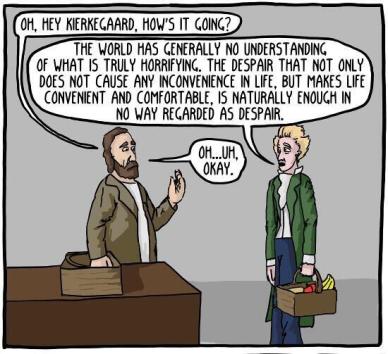 “The existential question & the Dane’s answer.”

I had a bad case of Kierkegaard in college.

My diagnosis was directly attributable to Sister Mary Clare, my high school principal at Immaculata Prep.

You see — from my Jesuit educated dad, I inherited an insatiable curiosity and an inquiring mind. Virtually all my sentences ended in question marks – especially in religion class.

“Transubstantiation makes no sense, Sister. Why would Jesus want us to eat him?”

“The atonement? Why does God kill his only son to save us? What kind of God is that?”

“Bad Catholics go to heaven? Loving Buddhists go to hell? What’s up with that?”

And the deepest and most disturbing question: “Why is French kissing a mortal sin?”

Called into the principal’s office, Sister Mary Clare sat me down to set me straight.

“Joani, you have to stop asking questions in religion class. You are confusing the other girls.”

“Joani, you are intellectually gifted but you are spiritually retarded.”

I loved my three years at Catholic U. Historically we read the greatest thinkers of all times: ancient, medieval, modern, existentialist and more.

And because I left in my final year without finishing, I missed out on a generation or two of 20th century thinkers: Foucault, Derrida, etc.

But what I did not miss out on was a first class education. Philosophy not only exercises the brain and challenges the mind –philosophy is therapy for the soul.

I aced logic and excelled at metaphysics. I ached with existential angst. I entered Catholic U a parochial school girl and by the time I left I was a Platonic, Hegelian, Enlightened, phenomenological agnostic.

(What does this exactly mean? I don’t exactly know.)

I loved it and my grades proved it. I was invited by my professors to enter the prestigious School of Philosophy.

All of my professors were men. All of the School’s students were seminarians. Need I state the obvious? All men.

Women’s numbers in philosophy departments have dramatically improved since my college days – approximately 20% now in the US and higher the UK. But these are still low ball numbers compared to the numbers of women scholars in other halls of the humanities.

A book review in the July 17th issue of The Times Literary Supplement suggests the gender gap is not just a matter of bias – but women like myself – self-selecting out.

But philosophy – as does theology – gets carried away with itself for the sake of itself – tripping over technical jargon and getting lost in mind numbing minutia.

So lots of brilliant women just say “NO!”.

David Papineau’s TLS piece on “Women in Philosophy: What needs to change?” proposes that “pointlessness, pugilism, nitpicking, pin-dancing” are “all possibilities of why women avoid philosophy.”

Hysterically he uses the example of professional snooker – a limited but very illuminating analogy.

“Even though women are eligible to compete as professionals, none is ranked in the top hundred. The six-times world champion, Steve Davis, has no doubt about the reason. It’s not that women are incapable of the highest levels of skill. It is rather that as a group they are disinclined to devote obsessive effort to ‘something that must be said is a complete waste of time – trying to put snooker balls into pockets with a pointed stick.’”

“As Davis sees it, ‘practicing eight hours a day to get to world championship level’ ranks high among the ‘most stupid things to do with your life.’”

In other words, women philosophers, might ask more truly meaningful questions – and then choose to explore them in life affirming ways – not wasting their time contemplating “how many angels dance on the head of a pin.”

After marriage and children, I meandered back to school and matriculated in philosophy once again – but this time with an interdisciplinary flair. My undergraduate thesis was on comparative Christology according to George William Friedrich Hegel, Carl Gustav Jung, and John A.T. Robinson.(Don’t you love all those names?)

I remember virtually nothing of what I wrote (the manuscript is lost to time, thanks be to God). I do remember though that it mattered a great deal to me at the time.

A matter of vital importance, I did the best I could to answer Christ’s question:

Who do you say that I am?

“I” here is reflexive pronoun, plural and not just singular. For Christ and me. “I and Thou”.

It’s a very bipolar question – this philosophical and theological question. And better than 100 milligrams of Seroquel – it keeps me focused. Trying to answer it sharpens my mind. It clarifies my thoughts. It keeps me grounded and tethered to the ground – the “ground of my being”. It keeps me honest. It keeps me whole.

A dose of philosophy can be good therapy – exercise for the mind, medicine for the psyche, a balm for a fevered brain.

And regardless of the answers – as a seminary professor once famously said — “learn to love the questions.”

Learn to lean into the questions.

4 thoughts on “I fear and tremble…therefore I am…”

Check out Joani's other blog!