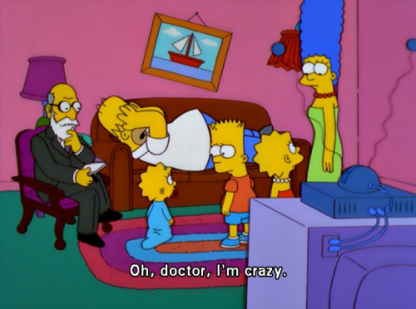 I am a doctor’s daughter, the daughter of Dr. Peacock, in fact.

It was one of my father’s greatest disappointments that none of his six children grew up to be a doctor. It was not for wont of seeing him in action. I was in awe of the man.

If we faked an illness and tried to play hooky, my dad would pull out his little black bag. Dr. Peacock would look down your throat with a tongue depressor; check out your ears with a little flashlight, and poke and prod your stomach. Invariably he would prescribe two aspirin and send us off to school.

There was no hoodwinking Dr. Peacock. He was the best in his field. A 1950 grad of Georgetown Medical, Chief of Surgery at Cafritz Memorial, and a teaching doc at Howard U, he knew his stuff. Every summer he would brush up on the latest and greatest at Harvard. His bookshelves were lined with medical texts; his desk was littered with journals.

My dad was a doctor’s doctor. A surgeon, he favored the scalpel. And no matter the diagnosis, Dr. Peacock deployed his healing arts with passionate professionalism. He would accept no less.

“Remember you’re a Peacock.” he would tell us. “Don’t do anything half ass.”

And what medically speaking was half ass to my dad?

Faith healers, chiropractors, osteopaths, herbalists, acupuncturists. Quacks and hacks one and all.

Though science may have redeemed some of the above – at least a little, the medical lesson I learned from my dad is clear.

This applies just as much to the matters of the mind. It’s just as true for broken brains as it is for broken bones. My bipolar brain has benefited greatly from psychiatry and pharmaceuticals. And I am also the beneficiary of twelve years of talk therapy – with three different therapists. Each excellent in their own way.

So once again, dear reader, take note and buyer, beware.

Biblical Therapy “Take two scriptures and call me in the morning.”

“Developed in the 1960’s, biblical counseling rejects conventional approaches to mental health and holds that the Bible is sufficient as a guide to treatment. …In biblical counseling, most psychological distress is rooted in sin, and the path to healing lies in confession and repentance.“

“It has become dominant in conservative Christian denominations that follow Reformed (Calvinist) theology… For millions of Americans suffering from anxiety, depression, bulimia, anorexia, bipolar or obsessive-compulsive disorder, or even schizophrenia, biblical counseling is the sole form of treatment they are likely to receive.”

“Accreditation organizations like the Association of Certified Biblical Counselors have certified just over 1,000 counselors to date – but biblical counseling does not require accreditation.”

“In 2013, 48 percent of self-identified evangelical, born-again, or fundamentalist Christians said they believe that conditions like bipolar disorder and schizophrenia can be treated with prayer alone.”

Past Life Regression Therapy “In a former life I was…..”

“Some New Age therapists do Past Life Regression therapy under the guise of personal growth; under the guise of healing. As a tool for New Age explorers, there may be little harm in encouraging people to remember what are possibly false memories about living in earlier centuries…But as a method of healing, it must be apparent even to the most superficial of therapists that there are great dangers in encouraging patients to create delusions. Some false memories may be harmless, but others devastating. They can increase a person’s suffering, as well as destroy loving relationships with family members. The care with which hypnosis is used seems obvious.”

“There are no medical internships in PLR therapy, nor does being a medical doctor grant one special authority in metaphysics, the occult, or the supernatural.”

“Psychologist Robert Baker demonstrated that belief in reincarnation is the greatest predictor of whether a subject would have a past life memory while under regression hypnotherapy….”

“Since therapists charge by the hour, the need to explore centuries instead of years will greatly extend the length of time a patient will need to be ‘treated’, thereby increasing the cost of therapy.”

Read more at The Skeptic Dictionary.

Conversion Therapy “Pray the gay away.”

“So-called ‘conversion therapy’ is a range of dangerous and discredited practices that falsely claim to change a person’s sexual orientation or gender identity or expression. Such practices have been rejected by every mainstream medical and mental health organization for decades, but due to continuing discrimination and societal bias against LGBT people, some practitioners continue to conduct conversion therapy. Minors are especially vulnerable, and conversion therapy can lead to depression, anxiety, drug use, homelessness, and suicide.”

“Many right wing groups promote the concept that an individual can change his or her sexual-orientation, either through prayer or other religious efforts, or through so-called “reparative” or “conversion” therapy. The limited research on such efforts has disproven their efficacy, and also has indicated that they can be affirmatively harmful… Broader research clearly demonstrates the significant harm that societal prejudice and family rejection has on lesbian, gay, bisexual, and transgender people, particularly youth. Furthermore, there is significant anecdotal evidence of harm to LGBT people resulting from attempts to change their sexual orientation. Based on this body of evidence, every major medical and mental health organization in the United States has issued a statement condemning the use of reparative therapy.”

“Published in 1950, Dianetics maintained that the source of mental and physical illness could be traced back to psychic scars called ‘engrams’ that were rooted in early, even prenatal, experiences, and remained locked in a person’s subconscious, or ‘reactive mind.’ To rid oneself of the reactive mind, a process known as going ‘Clear,’ Dianetics, and later Scientology, preached a regressive-therapy technique called auditing, which involves re-experiencing incidents in one’s past life in order to erase their engrams.”

“Most auditing is done with a device called the electropsychometer, or E-meter. Often compared to lie detectors, E-meters measure the changes in small electrical currents in the body, in response to questions posed by an auditor. Scientologists believe the meter registers thoughts of the reactive mind and can root out unconscious lies. “

“The path to Scientology enlightenment is known as the Bridge to Total Freedom. There are specific stages, or “grades,” of the Bridge, and the key to progressing ‘upward’ is auditing: hundreds, if not thousands, of sessions that Scientologists believe can not only help them resolve their problems …The ultimate goal in every auditing session is to have a ‘win,’ or moment of revelation, which can take a few minutes, hours or even weeks — Scientologists are not allowed to leave an auditing session until their auditor is satisfied.”

“But many Scientologists pay dearly for the service. Unique among religious faiths, Scientology charges for virtually all of its religious services. Auditing is purchased in 12.5-hour blocks, known as “intensives.” Each intensive can cost anywhere from $750 for introductory sessions to between $8,000 and $9,000 for advanced sessions.”

“’Operating Thetans’ (OTs) are Scientology’s elite — enlightened beings who are said to have total ‘control’ over themselves and their environment. OTs can allegedly move inanimate objects with their minds, leave their bodies at will and telepathically communicate with, and control the behavior of, both animals and human beings. At the highest levels, they are allegedly liberated from the physical universe, to the point where they can psychically control what Scientologists call MEST: Matter, Energy, Space and Time.”

“In the process, they are put through an intensive auditing process. They sign a waiver promising never to reveal the secrets of OT III, nor to hold Scientology responsible for any trauma or damage one might endure at this stage of auditing. Finally, they are given a manila folder, which they must read in a private, locked room.”

“For those you who are not familiar, OM (orgasmic meditation) is a sequenced practice in which one partner gently strokes the other partner’s clitoris for 15 minutes. The result is said to be therapeutic, rather than sexual. The ‘stroking’ allegedly activates the limbic system and releases a flood of oxytocin. The technique was originally billed as a spiritual-style practice like meditation, but as it gains popularity it is being presented as more of a ‘technological innovation’ or ‘body-hack to happiness’. The guru of the technique, Nicole Daedone, guarantees that it is profound whether you’re coupled or singled.”

“Here are [a few]important things to know about OneTaste and the OM experience.”

“It’s not free. Make no mistake, this is the kind of sexual awakening that you can pay anywhere from small bucks to big bucks for. OneTaste has centers in London, Los Angeles, San Diego, Boulder, and New York. The company offers Coaching Certification ($15,000), a Mastery Program ($7,500), a one-day Play Class ($195) and Turn On events ($10).”

“Many of OM employees live in the same residence. OneTaste’s headquarters, where the company hosts therapy sessions and OMing classes, is located in SanFranciso. It’s spiritual center is just blocks away and many of the employees live there. OneTaste’s business development manager describes the living situation as fluid.”

‘You come in with certain boundaries and because it gets multidimensional, it starts to crack open. Friends are lovers are friends’.”

“It’s targeted at ‘tired and “wired’ women. A OneTaste employee described the OMing practice as being like a morning latte for the female body”

“You do the ‘stroking’ in front of other people in something called a ‘nest’. ‘Nests’ for OMing are made with the Signature OM Kit, which you have to buy for about $200. This consists of a yoga mat covered with blankets and scattered with pillows. The organic lube comes with the price of admission to an OM concert.”

“One participant describes her experience: ‘I think halfway through, I’m not sure, it felt like the front half of my body was being sunburnt and there was a little soft arrow that stopped my breath.’”

Read more  of the 7 Things to Know About OM or  Nitasha Tiku’s full article at The Gawker.