I am a child of the sixties, an aging hippy. So, it will come as no surprise to many of you that I have been a bleeding-heart liberal from my earliest days. A badge of honor that has also sometimes blinded me along the way to the voices and viewpoints of others. Stereotypically, I was a teenager in rebellion against my tastefully conservative mom and dad. A “straight A” student, I rebelled in more subversive ways.  I skipped school to protest the Vietnam war.  I served — in name only — on the staff of an underground newspaper that never actually published even a single issue. (Sister Mary Clare really clobbered me for that one!)  Never a jock, I won awards with my words, my adolescent purple prose.  I earned my high school letter at debates and speech contests. In one stellar outing, I gave a speech supporting birth control in the voice of a not yet fertilized egg. And from my secure, segregated suburban life, I railed against racism. I remember but one line from my blue-ribbon speech that took me to the city finals: “The blood of the black man is on my lily-white hands.”

I loved the talk but I myself did not always walk the walk.

Thirty years later, this preacher woman was sitting at her desk on a Friday afternoon when. an elderly African American gentleman paid me a call.  His concern and complaint. took me totally by surprise.

He wanted to know if our choir had participated in the Martin Luther King Day Choir Festival. Proudly I told him yes. that indeed both of our choirs had sung that day in honor of the slain civil rights leader. MLK, Jr., I told him, was a saint in the Episcopal Church whose feast day is April the 4th.

Well, this gentleman was a contemporary of Dr. King and said for certain that he knew there were finer preachers whose names he rattled off. And worse than that did I know, he said, that Martin Luther King had been tom-catting around Atlanta. He and his wife claimed to know of the Rev. King’s illicit comings and goings.  And then he blamed bleeding heart liberals like me for canonizing this flawed leader.

Martin, he said, talked the talk. but he certainly did not always walk the walk.

Indeed, all of these years later many have measured the weight of Dr. King’s life differently. He has been accused of many failings including communism and plagiarism. Younger African-Americans have criticized his passivity.  And biographers have lingered over his personal life.

“The truth of the matter is that Martin Luther King Jr.  was Martin Luther King Jr. till the day he died. Organizer, preacher, prophet, father, husband, cheater, lover and leader.  He struggled with anger and depression and excess all his life.  And like the rest of us in our own struggles, he never totally conquered any of them.”

Prophets you see are not always perfect. Seldom are they saints and even once sainted remain sinners.

“King was an unlikely leader, black in a white country, a preacher who led a political struggle, the son and grandson of ministers who held a privileged place in the black community.  Proud of his family and home, he learned young that he lived on the wrong side of town.  He lost his two best friends in the first grade because their mother would not let them play with a ‘colored’ boy.  When he was twelve, a society matron in a downtown department store called him the n-word and slapped him across the face. The sting of it stayed with him for the rest of his life.  He was with his father when a shoe salesman refused to wait on them unless they moved to the back room of the store. It was the first time he had seen his daddy so angry and he remembered his response.  ‘I don’t care how long I have to live with this system. I am never going to accept it.  I’ll oppose it till the day I die.’”

Again, and again the message was hard to ignore.  And Martin began to get the message. Speak Lord for your servant is listening.

“And so, like his Daddy, he grew up to be pastor of a major black congregation in Montgomery, Alabama. It was 1955 and Rosa Parks had refused to give up her seat on the bus. And for the first time, King stepped out his privileged pulpit and truly became a prophet.  The first night of the bus boycott he addressed thousands who had gathered for a mass meeting. And he addressed them with the truth, with Gospel truth.”

“’Our method will be that of persuasion, not coercion. Love must be our regulating ideal.  Once again, we must hear the words of Jesus echoing across the centuries: ‘Love your enemies, bless them that curse you, and pray for them that despitefully use you.’ If we fail to do this, our protest will end up as meaningless drama on the stage of history, and its memory will be shrouded with the ugly garments of shame.  In spite of the mistreatment we have confronted, we must not become bitter, and end up hating our white brothers and sisters. Let no one pull you so low as to make you hate them.’”

“’If you will protest courageously with dignity and Christian love, when the history books are written the historians will have to pause and say. There lived a great people, a black people, who injected meaning and dignity into the veins of civilization’.” (A Passion for Life, Joan Chittister)

The Lord called him before he was born to be a prophet, and hid him away, a polished arrow in God’s quiver, until it was time.

Now most of us, if we got the call to be such a prophet would hang up. Biblically speaking, prophets are not particularly attractive folk. They tend to push the envelope of society’s conventions and expectations. Frederick Buechner says that, Elisha would have been called cruel, for turning bears loose on boys who taunted him.  Jeremiah would be called crazy for literally eating the scroll on which sweetly written was the word of God. Amos would be called a carpetbagger. for berating his southern neighbors to justice with a northern accent.

Prophecy is not very desirable work. Telling the emperor, he has no clothes is a thankless task. Isaiah tells us “The Lord says, who formed me in the womb to be his servant…I will give you as a light to the nations, that my salvation may reach the end of the earth. He said this to Isaiah as “one deeply despised, abhorred by the world, the slave of rulers.  And despite this or maybe even because of this, ‘Kings shall see and stand up, princes, and they shall prostrate themselves, because of the Lord who is faithful, who [had chosen him.]”

And the prophecy business is dangerous work. While God may have the prophet’s back, God does not show his face, and people are likely to shoot the messenger.  Jeremiah was thrown into a cistern.  Isaiah was rumored to be sawed in half. And Martin was stabbed, attacked, and his home bombed many times. And then cut down by an assassin’s bullet in April of 1968. Just thirty-nine years old.  Prophets pay a price that most of us dearly would not like to pay.

So, what about us? For what did God knit us together in our mother’s womb? In what small everyday way does call us to be prophets in our own day?

God whispers in ears. Not just into the ears of saints but into the ears of all of us. Niggling, annoying words, taunting us to rise up out of our lazy beds. To witness and to speak up for those struggling at the margins.

In God’s eyes, our status quo will just not do. God is always calling us to more, not less; to turn towards love and life and away from disdain and indifference. May God grant us the strength to reach down, way down, deep down and find the courage, the compassion to speak a prophetic word.

And so aptly let us pray,

Almighty God, by the voice of your prophets, you have led your people out of slavery and into freedom; Grant that we, following the example of the prophet Martin, may resist oppression in the name of your love; and may secure for all your children equality and liberty, peace and justice, here on earth, and life abundant in the kingdom to come. Amen. 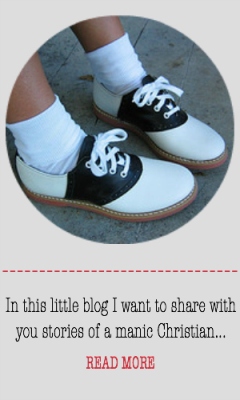 Check out Joani's other blog!